From Control Engineering
Jump to navigation Jump to search

Proportional Integral Derivative(PID) control is The most commonly used control method as it is suitable for 95%[Citation Needed] of control applications due to the simplicity of implementation, easy tuning in linear systems, and the beneficial characteristics introduced by the integral and derivative terms. 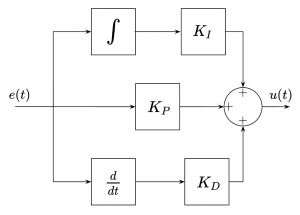 Block Diagram of a PID controller.

The Laplace transform of the above PID controller may thus be written as:

Converting to a transfer function gives:

The proportional term in a PID controller acts directly on the current error measurement. The error is multiplied by the proportional gain in order to calculate the control output.

The integral term accounts for the past error measurements. The integral of the error is multiplied by the integral gain which gives a stronger control signal, the more time is spent with an error. This term is used to compensate for steady-state errors seen in pure proportional controllers.

As all three components of the PID controller are not always necessary, the individual combinations of proportional, integral, and derivative terms are considered separately.

Proportional controllers are typically suitable when the desired transient and steady-state responses are achievable with only a gain term. This is very often not the case as most systems have some nonlinear terms which require further compensation. The proportional term, however, provides a rapid response dynamic and is thus used as a component of many other controllers.